Part II—The Changing Face of the Charts in the 1950s

PREVIOUSLY:  Part I— Defining a Song’s Popularity Using the Charts looked at the evolution of song chartability from Billboard’s ‘Best Selling Singles,’ ‘Rhythm & Blues,’ and ‘Country & Western’ charts to the current ‘Hot 100’

While it might be easy to “blame rock ‘n’ roll”, the birth of rock ‘n’ roll and its takeover of the charts in the 1950s was only one factor in Broadway music’s erosion from the pop charts.  No doubt, rock changed American popular music and created a generational gap, but in terms of chartable popularity, rock did more to unify listenership than to divide it.

Elvis Presley’s “Hound Dog”/ “Don’t Be Cruel” became the first song in the history of American popular music to attain number one status on all three of Billboard’s major charts in 1956, essentially unifying a disparate listenership.

From 1956-1960, rock ‘n’ roll—particularly a young musician named Elvis Presley—provided the most unity of the three charts and therefore of America’s popular musical tastes to date.  Elvis Presley’s “Heartbreak Hotel” earned the number one position on both the ‘Best Selling Singles’ and the ‘County & Western’ charts as well as placing high on the ‘Rhythm and Blues’ list in 1956.  Later that year, the disc “Hound Dog”/ “Don’t Be Cruel” became the first in the history of American popular music to attain number one status on all three charts (Hamm 126).  But this unanimity dissipated in the early 1960s, returning the markets to their former subcultures with two significant differences.  First, rock ‘n’ roll remained as a mainstay of the newly-created ‘Hot 100’ which was formerly occupied almost exclusively by the Tin Pan Alley genre.  Second, artists who might never have crossed over into other markets were able to find listeners in some cases outside their expected audience.  For example, white listeners who found ‘Rhythm & Blues’ music appealing have helped artists like James Brown, Gladys Knight, Stevie Wonder, Aretha Franklin, Marvin Gaye, and Michael Jackson earn spots on the ‘Hot 100’ throughout the 1960s.  By and large, however black listeners did not respond as well to music by white performers.  Even the Beatles sold poorly in markets that catered to black listeners.  Still, from this point on, the ‘Hot 100’ marked song popularity across genres in the US.

Broadway music itself shifted in significant ways during the 1940s and 1950s thanks in large part to the “Rodgers and Hammerstein revolution.”  Starting with Oklahoma! in 1943, their shows made strides towards popularizing the musical in

terms of record sales but also made strides away from their playability on the airwaves.  While the Tin Pan Alley song form was still alive in terms of the musical structure of Rodgers & Hammerstein songs, the integration of their lyrics to the storytelling started to prove difficult to lift them out of context.  The bench scene in Carousel features luscious music, but the specificity with which Rodgers and Hammerstein were writing their lyrics—not to mention the fluid movement between dialogue and song—didn’t lend for a hit single that could be lifted straight from the score.  Later in Carousel, Bill has a seven-minute journey in “Soliloquy,” much too long compared to a three-minute radio song. 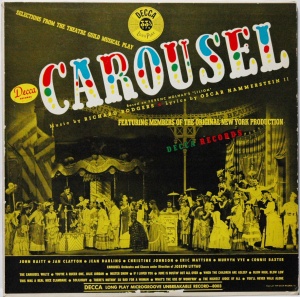 The integrated style they were innovating was meant to serve the story, not sell singles.  This is not to say that Rodgers and Hammerstein were not thinking of record sales.  In fact, Oklahoma! boasts the first original Broadway cast recording that included the actual cast with the actual orchestrations—instead of a big band crooner cover of their songs.  This was beneficial in bringing the home listener a complete experience of a Broadway show.  Sale of cast albums soared.  The original Broadway cast recording of South Pacific was the top-selling record of the 1950s.  But just as Broadway was innovating towards the album and a means of mass-proliferating its music, radio airplay was trending away from it and towards the single.

“[Sondheim’s] songs seldom achieve popularity outside the context of their shows because the composer creates material exclusive to context, to the particular characters for whom the songs are written and the specific situation that precipitates the dramatic revelation.”

Following in Rodgers and Hammerstein’s tradition, Hammerstein’s protégé Stephen Sondheim took the integration of score and story even further.  What Sondheim then did was to create songs that were so intertwined with story that extracting them for the purposes of making a single became nearly impossible.  As Richard Kislan states:  “His songs seldom achieve popularity outside the context of their shows because the composer creates material exclusive to context, to the particular characters for whom the songs are written and the specific situation that precipitates the dramatic revelation” (150).  He goes on further to explain that these songs “defy transplantation with the tenacity of any vital organ determined to remain in the body for which it was designed.”  Imagine “I’m Not Getting Married Today” from Company—a spastic bride’s tongue-twisting tirade on how she is not marrying her fiancé, Paul—on the airwaves.  The general population would not understand the frenetic wordplay, would not be able to sing along, and would wonder who this ‘Paul’ is.  In his book, The Musical:  A Look at the American Musical Theater, Kislan states that the modern theatre song exists to fulfill a dramatic or theatrical function (219).  In particular, the composer uses the theatre song to do one or more of the following:  project character, intensify emotion, create dramatic images, embody a theme, or suggest time and place.  It would seem that if a musical theatre song achieves any of these too successfully, they may have trouble gaining chartable popularity.

UP NEXT:  Part III—Examining Early Chart Toppers includes early #1 hits “Smoke Gets In Your Eyes” and “Mack the Knife.”