#66Kicks: An Epic Trip on the Mother Road

In a stroke of uber-Throwback Thursday-ness (and some might say self-indulgence), I am celebrating this #tbt with a retrospective of my epic road trip west.  I departed Belleville, IL for San Diego, CA one year ago today.  My itinerary would be as whimsical as I pleased.  My course would be Route 66 as much as was possible.  My philosophy would be to embrace adventure everywhere.  I wanted to taste road food.  I wanted to see kitsch.  I wanted to take in both the natural and man-made wonders of our country.  I wanted to see the guts of America.

And I wanted to start a new chapter of my life.

Packing for college the second time was just like the first: put your life in a car. (8/6/14) 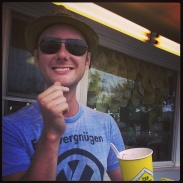 It was an emotional goodbye–in the Ted Drewes parking lot. Oh, how I love mein schwestern. (8/6/14)

This Steak ‘n’ Shake in Springfield, MO is the only one left with curbside service. (8/7/14) 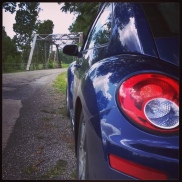 Truss between Springfield and Carthage, MO (8/7/14)

Ed Galloway’s Totem Pole Park was the first of a lot of painted concrete I would see today. (8/8/14)

Passing through Claremore, OK–hometown of Will Rogers–proved to be a surprise highlight of the day. (8/8/14) 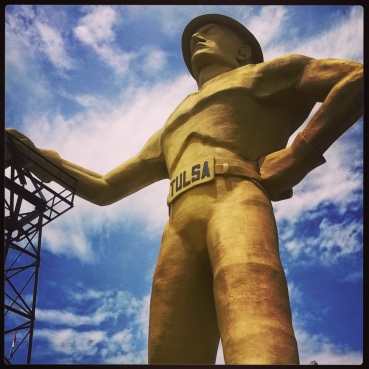 This guy–the Golden Driller–stands 75 feet and watches over the Tulsa Convention Center. (8/8/14)

Round Barn in Arcadia, OK is a graceful structure with a warm hue. Round barns were thought to be tornado proof. (8/8/14)

You better believe I had my share of road food. Roberts Grill serves up the famous onion fried burger. (8/8/14)

The most intriguing part of the trek through the Texas panhandle was Glenrio, a true ghost town. (8/9/14)

“Tucumcari Tonight” is the slogan for the little town across the NM border. Neon motel signs stretch the length of 66 along through town. (8/9/14) 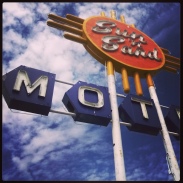 I detoured to visit Acoma Pueblo or “Sky City.” The Acoma people still live on top of the mesa today. (8/11/14) 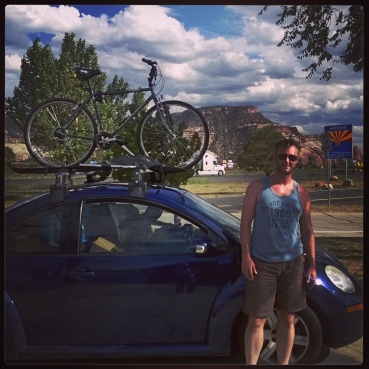 After a lot of sun and walking in Acoma and a caffeine fix in Gallup, I soldiered on to Arizona. (8/11/14)

I veered south to drive through the Painted Desert and Petrified Forest National Park. I was tired by the end, but I didn’t regret it. (8/11/14) 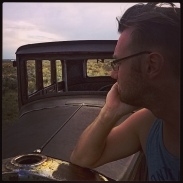 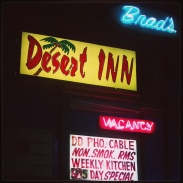 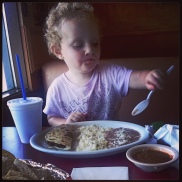 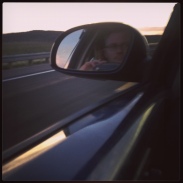 Driving at twilight was one of my favorite times on the road. It was a relaxing, cooling time of day. (8/14/14) 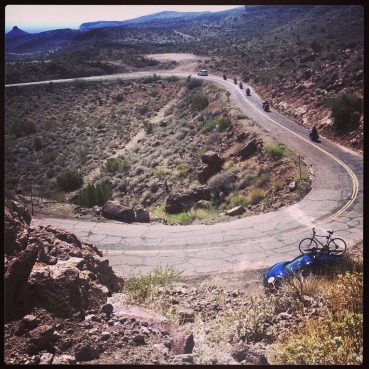 Driving in the morning held a sense of adventure, especially with these turns between Kingman and Oatman, AZ! (8/15/14) 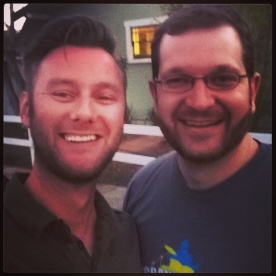 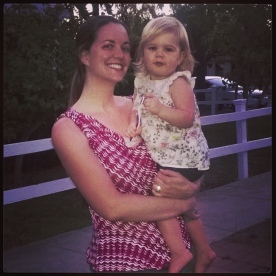 Travel–when done properly–changes you.  I don’t think anything could have prepared me more fully for the transforming experiences of this past year than last August’s cross-country road trip.  If you find yourself at a crossroads in life, take a journey.  You might discover loved ones waiting for you at the end.

If you’d like an extra large helping of #66Kicks, check out the full gallery.  But don’t say I didn’t warn you.

This ends–for a little while–the story of the journey towards choosing SDSU.  A year ago last week, I was auditioning in San Diego, and a year ago this week, I was being offered a position in the 2016 MFA class.  Wild, right?   So, here are a few final journal entries that retell a small part of my process.  Sharing it has provided me with an opportunity to reflect on the events of the past year, consider how I make decisions, and revel in those who have helped me along the way.  As I’ve stated in previous posts, if someone out there in cyberspace is also considering a big change, hopefully reading about my journey has showed him or her that he or she is not alone. 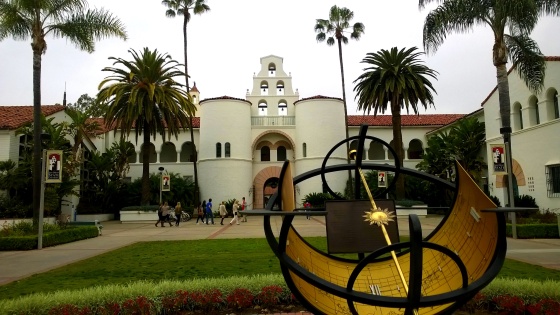 March 2014–The SDSU campus on a cloudy spring audition day. Little did I know I’d be there every day one year later.

Wow.  Having a little freakout.  No, not freakout…just struck with reality that all of this might actually happen.  Lots of thoughts, no order.  Here goes:

I kicked off the singing/acting auditions today at SDSU.  I nailed it.  Was ready.  In the zone.  Felt amazing.

The people have been really nice so far.

Saw Pal Joey last night.  Impressed with some individual performers, but all together not a whiz-bang show.

Still amazed at all of the vegetation that in Illinois would be considered “houseplants” and here is just plunked in the ground.

They are dedicating a new student union this week–which is where I’m writing–which is also gorgeous.  Everything is buzzing.  It feels good.

This is a bigger school than I imagined.  This is way bigger than Lawrence.

How am I going to pay for this?

As much as I have been dreading the question “What do I do if I don’t get in to this school?” for some reason the prospect of uprooting and moving to San Diego for two years suddenly feels scary as well  I would probably be skeptical if it didn’t  give me butterflies, though.

If there’s times, Jared is going to take me to their new house in Escondido.  I think I still want to live with them.  I wonder if they feel the same.  It is a stressful time for them right now, too.

I should learn Spanish if I come here.  That would be fun.

As I’m walking around, I am wishing loved ones were here so I could show this to them.  I think that is a good sign.

And here are a few excerpts from writing on the plane home the following day:

Yesterday’s audition was exceptional.  The whole day simply felt good.  After my individual audition and my own stroll around the campus, I returned to the Musical Theatre Archive for the “group interview.”  This was a time for all of the candidates to sit and hear a little more about the program.  Everything they related resonated with me.  Paula Kalustian–the MFA director–has had a long career as both artist and educator and she–like me–said that they have always grown together.  She’s not been able to let one or the other go, and so the program is also geared towards that.

The individual interviews came after that, and once again, I started.  It was at this meeting that I was able to convey how much it seemed like the philosophy of the program gelled with my own.  Paula expressed the same.  She asked about my professional goals.  I said I wanted to “kick it up a notch.”  We talked St. Louis theatre; she had done some work at Webster.  She asked about my dream roles and about my type.  I said that as I’m about to turn 34, I would like to play Bobby in Company.  She said she has directed it four times, looked straight at me, and nodded, “Yeah.”

In summary, I felt a real click with these people.  I think this could really happen.  And…I should know in a week.  How crazy is that?!

I feel a sense of peace in that it is now out of my hands.  I have done everything I can.  Now we wait.

On March 7, 2014, I was auditioning for the MFA Musical Theatre program at SDSU. On March 7, 2015, I was receiving the President’s Award for the Arts at the Student Research Symposium.