The fluke of Louis Armstrong’s single “Hello, Dolly!” bumping The Beatles from the number one spot in 1964 is the modern-day equivalent of someone like James Taylor recording “I’ve Decided to Marry You” and it bumping One Direction.

Despite Louis “Satchmo” Armstrong’s status as one of the greats of the jazz world, displacing the Beatles from #1 was an unlikely feat for a 63-year-old trumpeter/vocalist.  His music was as much a part of the Twenties and Thirties as it was the Sixties.  The song itself was written by Jerry Herman for the title character Dolly Levi’s second act entrance.  Like “Mack the Knife,” the song is solidly based in a jazz treatment.  The structure uses a slight variation on the Tin Pan Alley form.  Instead of an AABA structure, “Hello, Dolly!” uses an AAAB structure.  Regardless, it is still a form familiar to the musical theatre ear and easily placed in the jazz style.

The next chart topper from the Broadway realm came from one of the most significant shows of the 1960s.  Hair was among the first Broadway shows to deliberately embrace rock ‘n’ roll.  Hair opened off-Broadway at the New York Public Theatre in 1967 and transferred to the Biltmore Theatre on Broadway in 1968.

The show’s hippie themes of love, peace, and understanding contrasted with their edgy score and use of full-frontal nudity.  The show—“An American Tribal Love Rock Musical”—was an experiment for Broadway and a successful introduction of rock ‘n’ roll, although the impact on the show tune remains debatable.  One of the show’s creators, Canadian composer Galt MacDermot, muses: “It didn’t change Broadway much.”  On the other hand, William Goldman in The Season, wrote: “You better believe it’s gonna change things.  There will now be a spate of shitty rock musicals” (Kantor 325). 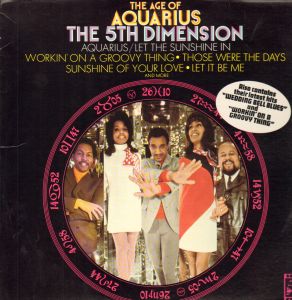 The Fifth Dimension recorded two songs from the musical Hair combined as one, ushering Broadway rock ‘n’ roll onto the pop charts.

In terms of crossover on to the pop charts, however, the music was ripe for the picking.  Because it was conceived in the rock style and with a rock song structure, there was little adaptation needed to make it appealing to the rock audience.  The group who plucked the fruit was The Fifth Dimension.  The opening of Hair was literally an anthem of a new era, and the age of “Aquarius” sang of that world.  “Aquarius/Let the Sunshine In”—unlike any of the songs discussed so far—employed a verse-chorus structure, indicative of the rock form.  Additionally, producer Bones Howe thought the song was missing something.  He imagined it needed something of a gospel sing-along at the end.  After seeing the show in New York, he recommended using the last three bars of the song “The Flesh Failures” which was subtitled “Let the Sunshine In.”  The audience joined in singing at the theatre, and thus Howe had the idea to take the two pieces and “put them together like two trains” (Bronson 2003 253).  “Aquarius/Let the Sunshine In” lasted six weeks at the top.

UP NEXT:  Part V—A Whole New World:  Movie Musicals and Disney considers not only the movie musical as the constant bedfellow of the Broadway show, but also recognizes Disney’s contribution to the survival of the musical on the pop charts.